OmniPC is a new software program that benefits from the same user interface and analysis and reporting features as the OmniScan with the added flexibility to be run on a personal computer.

With OmniPC, the OmniScan unit can now be used strictly for scanning while analysis is performed simultaneously on a personal computer. This software can also be used in conjunction with extra large screens for increased visibility, and with keyboard shortcuts for faster operations.

The OmniScan MX2 and OmniPC can both be used to generate reports with an indication table listing up to eight readings, such as amplitude, position, and size of the defects. The report can also be customized with additional readings and comments specific to each indication, and can be saved as an HTML document. RayTracing tools allow the indication positions to be represented on the weld profile. High-resolution images can be inserted along with all relevant inspection parameters.

Olympus is proud to introduce the latest 4.1 OmniScan software. This new release includes many enhancements and new functionalities.

In the effort for continuous improvement, the software interface was simplified and the response time optimized in order to provide the best experience possible for customers.

To simplify operation and ease the learning process for new and current OmniScan users, every item of the interface is now accessible at all times, due to the introduction of a single operation mode. As a result, all 3 environments are now unified:

To enhance the user experience, the new title bar provides instant access to the main display options. In addition, most common functions are now available through the intuitive interactive menus, offering tablet-like user-friendliness.

For applications requiring a multi-probe configuration, the multi-group layouts were improved so that the scanner configuration is reflected in the software interface. The position of the different scans is determined by their distance to the center of the weld, providing an easy-to-understand and appealing layout. 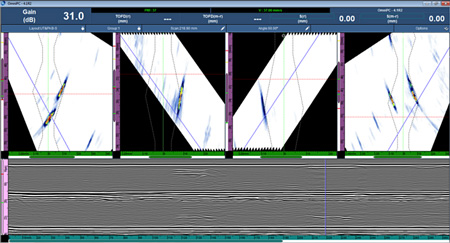 Notes:
1 Not compatible with version later than 3.1

Please note that all PA2, and UT2 files generated with MXU 4.1R2, and earlier are compatible with TomoView 2.10R6.

Notes:
2 Not compatible with version later than 3.1