Olympus is proud to introduce the OmniScan® SX, a flaw detector that benefits from more than 20 years of phased array experience and shares the OmniScan DNA. For improved ease of use, the OmniScan SX features a new streamlined software interface displayed on an 8.4 in. (21.3 cm) touch screen. A single-group and non-modular instrument, the OmniScan SX is easy to operate and cost-effective for less demanding applications.

The OmniScan SX comes in two models: the SX PA and SX UT. The SX PA is a 16:64PR phased array unit, which, like the UT-only SX UT, is equipped with a conventional UT channel for pulse-echo, pitch-catch or TOFD inspection. Compared to the OmniScan MX2, the SX is 33% lighter and 50% smaller, offering an unprecedented level of portability for an OmniScan.

The OmniScan SX is fully compatible with the extensive portfolio of Olympus scanners, probes and accessories, as well as with its dedicated software companions, NDT SetupBuilder and OmniPC. Combined, the complete family of software and hardware contributes to a streamlined and efficient inspection workflow, from design and setup to acquisition and analysis. 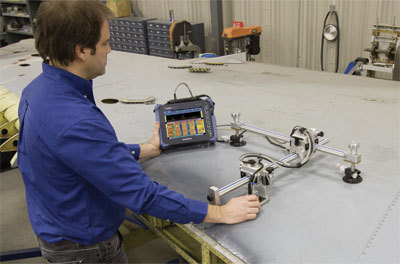 Olympus is proud to introduce the latest 4.1 OmniScan software. This new release includes many enhancements and new functionalities.

In the effort for continuous improvement, the software interface was simplified and the response time optimized in order to provide the best experience possible for customers.

To simplify operation and ease the learning process for new and current OmniScan users, every item of the interface is now accessible at all times, due to the introduction of a single operation mode. As a result, all 3 environments are now unified:

To enhance the user experience, the new title bar provides instant access to the main display options. In addition, most common functions are now available at your fingertips through the interactive menus of the full-screen mode, offering tablet-like user-friendliness.

The arrival of the OmniScan SX introduces a new “Application” Wizard. This handy software feature allows fast setup creation for the most common applications, rendering the setup process hassle-free.

Inspection setup can be performed in NDT SetupBuilder, and imported directly, via SD card or USB key, to the OmniScan SX. Then, only a few basic operations are required in the instrument, such as setting the gate and range, before acquisition can begin. It is also very easy to create a setup right in the OmniScan SX, thanks to the following features:

To achieve a code-compliant inspection, the Calibration Wizard ensures that every focal law in every group is the direct equivalent of a single-channel conventional flaw detector. The user is guided step-by-step through the required calibrations, including Velocity, Wedge Delay, Sensitivity, TCG, DAC, AWS, and encoder calibrations. Now, TOFD PCS calibration and lateral wave straightening can be performed automatically.

The OmniScan SX enables easy configuration of inspection parameters for either manual, one-line, or raster encoded scans. The acquisition is displayed in real time through user-selectable views and offers the ability to store data on a hot-swappable SD card or USB 2.0 device.

Whether you prefer performing data analysis on a computer or simply wish to maximize the time your OmniScan is at work in the field, OmniPC or TomoView are the perfect software companions for your OmniScan.

The Omniscan SX provides Olympus with a new and versatile tool to add to its arsenal of innovative and creative complete market solutions aimed at simplifying your workflow and improving overall productivity.

The OmniScan PA is at the heart of the manual and semi­automated phased array weld inspection solutions developed by Olympus for the oil and gas industry. These systems can be used for inspection in compliance with ASME, API, and other code criteria, while offering high-speed detection capabilities, and facilitating indication interpretation. 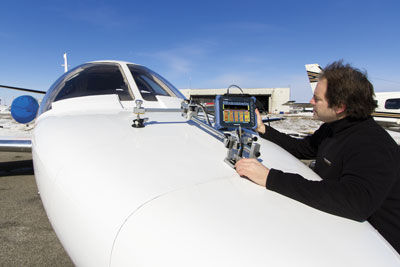 Zero-degree inspection just became even more accessible with the arrival of the OmniScan SX. For corrosion or composite inspection, Olympus offers field-proven solutions for detection of anomalies or wall loss. 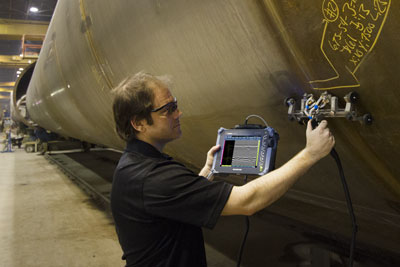 TOFD is an easy and efficient approach for primary detection of weld defects. It is quick, cost-effective and capable of sizing defects present in the volume of the weld, a problematic area for manufacturing defects. 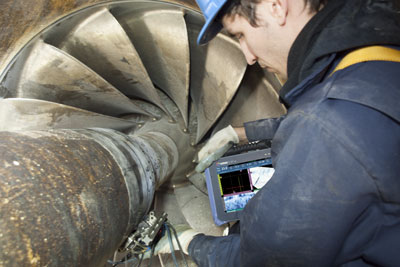 Using ultrasonic techniques, inspection of components can detect cracks, wall loss, and other damage. With the capacity for both angle and linear zero-degree beams, the OmniScan SX is a very cost-efficient solution for this type of single-group inspection.