The OmniScan® iX is an industrial ultrasonic flaw detector system designed for the high-speed testing of critical industrial components.
The compact OmniScan iX is housed in a rugged benchtop casing and is also available in a rack-mount version or with a swivel-arm assembly for easy integration into a production system.

Designed with the Integrator in Mind

The OmniScan iX is central to your industrial component testing system. Olympus provides all the software libraries required to enable the integrator to tie in your existing process control system.
In addition, we provide the user interface ports necessary to connect a display, keyboard, mouse, and external storage. The real-time programmable alarm and analog outputs, and the encoder outputs, enable easy integration of the mechanical and electronic components of your industrial process.
All that is needed for rapid and efficient component testing is built-in! 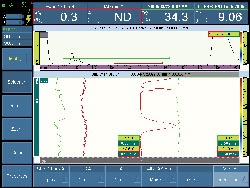 Channel Configuration
The OmniScan iX can be configured for pulse-echo, pitch-and-catch, or sequence firing.

Component Testing
Component testing is typically performed under an assembly-line environment. The OmniScan® iX is used to accept or reject (go-no-go testing) thousands of parts a day. Multichannel instrument configurations lend themselves very well to assembly-line applications, which are aimed at detecting flaws within the various zones of a part-not just under one particular area with one transducer. 16 alarm outputs on the OmniScan iX allow the tracking of a particular zone and monitoring the zone that is giving the alarm conditions.

Engine-Disc Inspection
Critical inspection of turbine engine discs requires a very sensitive ultrasonic flaw detector capable of detecting small defects in difficult nickel-based metals. Such instruments must be able to operate at high gains, with extremely low noise on both the A-scan display as well as the analog output. The OmniScan iX meets these very demanding requirements. Additional OmniScan iX features such as strip-chart recorder, C-scan display, and back-echo attenuator make this a very versatile instrument. The OmniScan iX can easily drop into existing, older test stations, then later transfer to a full functional station to perform on-board mapping/C-scan.

The OmniScan iXhas been qualified by GE Aircraft Engines and added to the DFO as follows: